What is PROMOVE Biodiversidade?

It is a biodiversity conservation and community development programme covering the provinces of Nampula and Zambézia, funded by the European Union, through the signing of an agreement with the Government of Mozambique in 2018 for a total amount of 13 million Euros.

Due to its experience in the area, BIOFUND was selected as one of the key partners in implementing the initiative. In December 2019, an agreement was signed between BIOFUND and the EU for financing to the value of 13 million Euros. Of this sum, 10.2 million are managed by BIOFUND and 2.2 million by ANAC to strengthen institutional capacity.

The implementation details of the programme were identified and initially formulated through an initial biodiversity study (2016) led by a team of researchers which included interviews with the public authorities and interested parties of civil society and the results of consultative seminars held in the selected provinces (Zambezia and Nampula) and at national level.

Protect biodiversity and contribute to improving the livelihoods of the rural communities through sustainable management of natural resources in the target areas of Mozambique.

Implement sustainable initiatives and strategies which improve the management and administration capacity of the areas where the project intervenes.

Adopt sustainable livelihood practices for the local communities living inside and outside (buffer zone) of the conservation areas.

Encourage and disseminate applied research and participatory studies linked to the management of natural resources to influence sustainable use and the policies.

The project focuses on 3 target areas in Nampula and Zambézia provinces:

The First and Second Islands Environmental Protection Area – APAIPS – covers an area of 1,040,926 hectares and was established in 2012 through Ministerial Decree 42/2012 of 12 December, and it is managed by ANAC. The Archipelago of the First and Second Islands is a complex formed by two groups of islands, each containing five islands, and laid out parallel to the Mozambican coast. The group of islands further south (Archipelago of the First Islands) is in Zambezia province, and the more northerly group (Archipelago of the Second Islands) is in Nampula provinces. The islands form an almost continual archipelago between the towns of Pebane and Angoche, along the coastline of Moma and Larde districts.

This environmental area is bathed by the Indian Ocean to the east. The western boundary of the Environmental Protection Area follows a line ten kilometres inland from the high tide mark, resulting in a terrestrial area of approximately 2050 km2. APAIPS includes estuarine areas, mangrove areas, inter-tidal areas, and rivers subject to tides from the Sangage River to the Moniga River.

BIOFUND has been supporting permanently and for the long term, the basic and minimum costs of this environmental protection area since 2019, with its own funds, from a grant by Conservation International/GCF, for the BIOFUND endowment). With the PROMOVE project, it is hoped to establish the initial management and administration conditions of the area, and at the same time encourage sustainable community economic activities.

The Gilé National Park has an area of 4398 km² (including the area of the buffer zone). It was established on 23 April 1932 and is under the management of ANAC in partnership with the IGF (which has invested in and supported the park since October 2020). This park has also benefitted from the support of BIOFUND since 2017, through funds of the AFD (APEM/Abelha project) and of the World Bank (Mozbio 1 project).

The PNAG is particularly important for the conservation of the noteworthy miombo forest, which alternates with several areas covered by savanna. Intact riverine vegetation is found on the banks of numerous water courses, functioning as a green lung of Zambezia province. PROMOVE seeks to support this and to complement the management and administration efforts of that conservation area, as well as to strengthen the participatory capacity of the local communities.

Mount Mabu covers an area of 7800 hectares, in Lugela district and the localities of Mabu and Mpemula. It is an area of enormous biodiversity, without any legal conservation status. It was discovered in 2006 and has been the stage of a series of scientific expeditions which have registered several endemic species (some of which are new to science). Mount Mabu is particularly important since it is one of the few areas with this type of ecosystem, which is poorly represented in the country’s current conservation areas. With the intervention of PROMOVE Biodiversidade it is hoped to lift the potential for the participation of the local communities and at the same time express methodologies for the creation of areas under community management in Mozambique.

The project is managed and monitored by BIOFUND and is being implemented by a series of implementation partners, who were previously identified/agreed (in the case of the PNAG) or selected through public tender (in the cases of APAIPS and Mount Mabu), which have subventions from BIOFUND. Subventions are also envisaged for implementing activities to support community development with the communities of the buffer zones, and for research, in the three areas covered by the project.

This project intends to strengthen and consolidate the interventions in the Gilé National Park – PNAG, particularly in the conservation of biodiversity and in community development by means of adequate management and administration, and effective and efficient patrolling of the natural resources inside and outside the Park. The subvention to support the conservation of biodiversity activities in the PNAG is being channelled through FFS/IGF and began in late 2020. Specific support for community development activities is being implemented by another entity, the Zambezia Network of Organisations for the Environment and Sustainable Community Development– RADEZA, which began activities on the ground in July 2021, in close coordination with PNAG and FFS/IGF.

As for the First and Second Islands Environmental Protection Area – APAIPS, the implementation of the Programme will be ensured through the creation of initial management and administration conditions with the main objective of strengthening the management and administration and establish an effective rangers team. The consortium (CTV-ConserveGlobal-TerraNautics) lead by CTV was identified as the implementing partner for this project, through a public tender and began activities in the ground in November 2021. They will work closely with the administrator of APAIPS and the local authorities, as well as the local private sector/partners and local communities, establishing the basic infrastructures and the ground procedures to support the functioning of this important conservation area.

For Mount Mabu, it is predicted that PROMOVE Biodiversidade will clarify the most adequate conservation category to designate this area and consolidate the participation of local communities in the management of natural resources where the experiences gained in planning, implementation and evaluation will inform the lessons learnt for the replication and establishment or not of other conservation areas with the direct involvement of the local communities. To ensure implementation of the project in this area, the consortium WWF-RGCRN-RADEZA was chosen, through a public tender, as the implementation partner, and its activities began in April 2021.

The program includes a component of Applied Research and Participatory Studies wich is transversal to all areas of implementation of PROMOVE Biodiversity and aims to bring subsidies that can influence decision-making processes on the management of natural resources and improve the livelihoods of communities living around the conservation areas. The implementation of this component is in the responsibility of BIOFUND and the themes studied are designed in close collaboration with the implementing partners of the Program, administrators of the Conservation Areas and respecting the research guides of ANAC.

The selection of the research teams is done through public tenders (see the announcement page for more details), after the completion of the surveys the results achieved should be disseminated to local communities, civil society and to all key stakeholders in the policy making process in the conservation sector, both at local and national level.

Strengthen and support the current stage of management and administration and strengthen activities with the communities.

Support formalisation of the status of Mount Mabu and community management of the natural resources.

To ensure adequate supervision and strategic guidance of the project, as well as its alignment with national policies and strategies, the National Supervisory Commission (CNS) was set up. This body is of a strategic nature and seeks to advise and accompany the implementing agencies and the beneficiaries of the project. It will meet once a year and consists of 16 members, including the European Union, project implementing agencies, beneficiaries and members of the central, provincial and district governments.

Members of the National Supervisory Commission

General Director of ANAC and chairperson of the National Supervisory Commission

Ambassador in the Office of the National Authoriser (GON)

Ministry of the Environment

Project Manager in the FFS-IGF Foundation

Mount Mabu, 1,700 metres high, occupies an area of 7,880 hectares and is regarded as the largest humid medium-high altitude forest in Africa. Located in Lugela district, in the interior of Zambézia province, Mount Mabu is a sacred forest, which is almost intact and is protected by the local communities. Whenever anyone wishes to visit the place, the Lugela district community leaders should be consulted to hold a traditional ceremony. In this way, since the remote past, the local population has looked to the preservation of one of the most robust forests on the entire planet.
Read More

On 26 November 2021, an implementation partnership agreement was signed between Centro Terra Viva (CTV), the Foundation for the Conservation of Biodiversity (BIOFUND) and the National Administration of Conservation Areas (ANAC), represented by the Minister of Land and Environment, under the Programme PROMOVE Biodiversidade (PROMOVE Biodiversity), to support the First and Second Islands Environmental Protection Area (APAIPS).
Read More

The European Union recently signed a financing agreement with the Foundation for the Conservation of Biodiversity (BIOFUND) to strengthen the BIO-Emergency Fund, in order to increase the fund’s coverage. The Fund is intend to preserve the jobs of the rangers and other staff who are fundamental for supporting inspection in the Conservation Areas, to mitigate the effects of the Covid-19 pandemic.
Read More

This is an agreement signed between the Foundation for the Conservation of Biodiversity (BIOFUND) and the Network for Environment and Sustainable Community Development in Zambézia (RADEZA), in the framework of the PROMOVE Biodiversidade programme, with financing from the European Union, to the sum of 792.000,00 (seven hundred and ninety two thousand) Euros, for the implementation of community development activities in the buffer zone of the Gilé National Park (PNAG) up to 2025.
Read More

On 15 July 2021, the “PROMOVE Biodiversidade” programme held the 1st meeting of its National Supervisory Committee, at a virtual event organized by the Foundation for the Conservation of Biodiversity (BIOFUND) and the National Administration of Conservation Areas (ANAC).
Read More

The Minister of Land and Environment, Ivete Maibaze, on 11 June 2021, launched, in the Gilé National Park, in Zambézia province, the biodiversity conservation programme, known as “PROMOVE Biodiversidade”.
Read More

This is the consortium formed by WWF, R-CGRN and RADEZA, which will implement the PROMOVE Biodiversidade (“Promote Biodiversity”) project on Mount Mabu.
Read More

Set up in 2010, the Ratata Natural Resources Management Committee, is located in the buffer zone of the Gilé National Park (PNAG), on the side of Impaca locality, in Pebane district and it is working in coordination with the Park, to find sustainable alternatives that seek to improve the livelihoods of the more than five neighbourhoods which accommodate about 7,000 households.
Read More 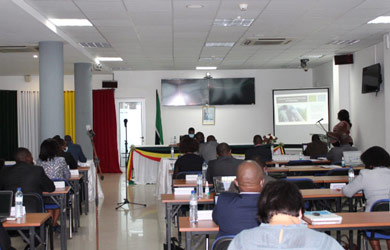 The PROMOVE Biodiversidade (Promote Biodiversity) project was officially launched on 11 June 2021, in the Gile National Park, in Zambézia province.

The Minister of Land and Environment chaired the launch ceremony which was also attended by the Ambassador of the European Union, the Secretary of State and the Governor of Zambezia Province, representatives of the Nampula Provincial Council of State Representation and Provincial Executive Council, officials from the Ministry of Foreign Affairs and Cooperation, ANAC, BIOFUND, Members of the governments of the districts covered by the intervention of PROMOVE Biodiversidade in Zambézia and Nampula, and representatives of the beneficiary communities and civil society organisations involved in implementation.

Highlights of the Launch of PROMOVE Biodiversidade